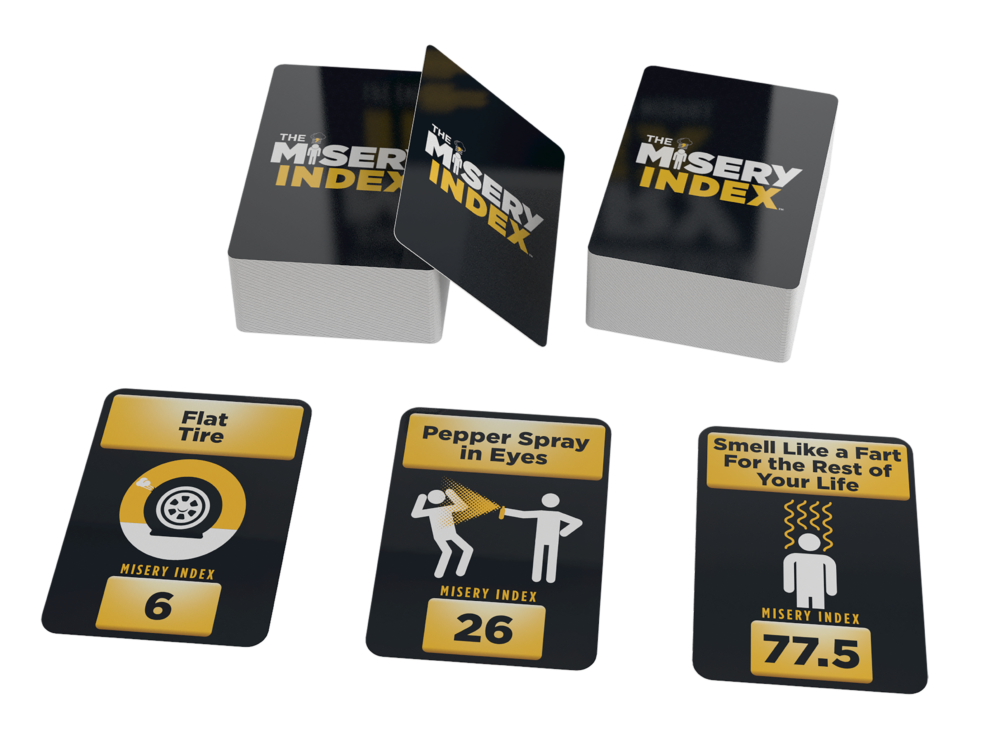 The game includes 200 cards, each with unique (and awful) situations. Each awful situation has been ranked from 1-100 by a panel of experts based on physical pain, emotional trauma, and long-term psychological impact. This ranking is what we call “The Misery Index”. At the beginning of the game, each player is dealt three situation cards, which they place face up on the table in front for them, ranked by numerical order of The Misery Index. This is called a players’ “Misery Lane”. There are three rounds of play:

• Round 1 — “Misery Lane”: The player to the right of the first guesser draws a card from the draw pile and reads the situation aloud and shows the illustration, but hides The Misery Index number on the bottom of the card. To win the card, the player must correctly guess where this situation falls in their Misery Lane. If they are correct, they win that card and add it to their Misery Lane.

• Round 2 — “More or Less Miserable”: After a player has collected a total of eight cards in their Misery Lane, they have now entered the second round. In this round, the player to the right takes the first three cards from the top of the deck and and reads the descriptions aloud. Now the player must correctly put all three cards in the correct order (from least to worst) by announcing them aloud to the group, without seeing their Misery Index number. If they are incorrect, play continues to the left and they will have another chance with three more cards on their next turn. If they are correct, they add them to their Misery Lane and progress to Round 3.

Win condition: Be the first player to have 12 cards in their Misery Lane.

Connect with us on Social Media